Valuing the Contribution of EU Citizens

In these very uncertain times it seems all the more important to recognise and celebrate the wonderful contribution that European citizens make to Scottish society.

Camphill in Scotland has more reason than most to value this contribution. Camphill was formed in Scotland in 1939 – but not by Scots. It was created by a group of Austrian refugees. They arrived in Aberdeen with only one of them able to speak English, cut off from their social networks and dependent on others’ charity.

As is the case with many refugees they displayed a tremendous inner strength and worked very hard to make a new life. Together, they created the first Camphill community at Kirkton House in Aberdeen. They wanted to build a community life where each person’s social, cultural and spiritual needs could be met and each had the opportunity to make a valued contribution to community life through their work.

Camphill is now a worldwide network of educational and social services for people with learning disabilities and other support needs. There are 119 Camphill places in 25 countries across the world.

In Scotland there are eleven Camphill communities including two Schools, eight adult communities and one for older people. Together, they provide services to around 650 people with learning disabilities and other support needs.

Camphill in Scotland is not only indebted to Europe for its original creation it remains fundamentally a European and international movement. This is graphically illustrated by the make-up of the current workforce in Camphill.

In Camphill there are three categories of worker providing social care and education.

The opportunity to come to a different country and meet people of different nationalities is a big part of what makes the Camphill volunteering experience attractive. It is an opportunity for young people to test themselves, grow and develop as individuals.

They live and work in the community 24 hours a day alongside the people they support. The vibrant mix of cultures and the opportunity to meet idealistic, energetic young people makes Camphill a distinctive provider of care and education for people with learning disabilities.

I will deal with each in turn.

Even if they do want to come it seems the new post-Brexit immigration system will make it hard for them That’s because it will treat Europeans in the same way as other nationalities. We know that this is not good news because we are well aware of the difficulties that other foreign volunteers can have in gaining visas.

From September 2017 to March 2018, for example, there were 48 applications from international volunteers to come and work with us. 20 of these were refused. That represents an increase in the rate of refusals of 50% compared to the previous year.

There would seem to be no change to the technical requirements but the rules seem to be interpreted in a more unsympathetic way. For example, one applicant was asked whether she would be earning a wage while with Camphill. She said no but added that she would get £165 per month for living expenses. The visa was refused as £165 per month was considered to be a wage – that works out at around £5 per day!

If EU volunteers have similar problems under new immigration arrangements, there are Camphill communities in other parts of Europe and further afield that they can go to instead.

Finally, the post-Brexit immigration system will be bad news for Camphill because it will serve to prevent those who come as volunteers from staying long term. This is because only skilled workers can stay long term – and you may be classified as a skilled worker only if you earn a minimum of £30,000 per annum. For comparison, a Senior Support Worker at the Corbenic community near Dunkeld earns between £18,000 and and £19,000 per annum.

By cutting off Camphill in Scotland from Camphill in Europe, Brexit poses a very real and profound threat to the people with learning disability and other support needs that we serve in Scotland.

What can be done about this?

We are trying hard to tell the world how much we care about and value the European workers who choose to live and work with us. This is a message we give on our website, our social media work and through articles like these.

We are also working with our European volunteering partner Freunde Waldorf to see how best we can maintain the flow of volunteers. Freunde travelled from Germany in April to talk with us about how best to address the impact of Brexit and continue to attract volunteers.

We have been working with others to safeguard the health and social care sector after Brexit. We are grateful for the support of Brendan O’Hara MP who has put forward a private members bill in the UK parliament – the European Union Withdrawal (Evaluation of Effects on Health and Social Care Sectors) Bill. This legislation would require the UK Government to make arrangements for an independent evaluation of the impact of Brexit upon the health and social care sector across the four Nations. We have been joined in this campaign by over one hundred other organisations.

We continue to work with others to help create a future immigration system that understands and facilitates the vital contribution that European volunteers make to the Camphill experience.

At the same time we are working with our members to help them consider how they could manage if Brexit were to impact on the number of volunteers wishing and able to work with them.

Inevitably, a reduction in the flow of volunteers would move Camphill towards a much more conventional social care model with employees engaged on a shift basis. This is no substitute for volunteers sharing their lives with people on a more informal and more complete way.

Camphill would continue but some of the vibrancy and depth of community life would be lost. Yet, like everyone else, we must be prudent of course and make contingency plans.

As I said at the start of this piece, at this uncertain and fractious time, it is more important than ever to recognise and celebrate the contribution of EU citizens across Scotland.

Camphill is very proud to be a European movement and our communities remain a vibrant mix of European and other nationalities. We will do everything we can to enable the vulnerable people we look after to benefit from the communities we create together. 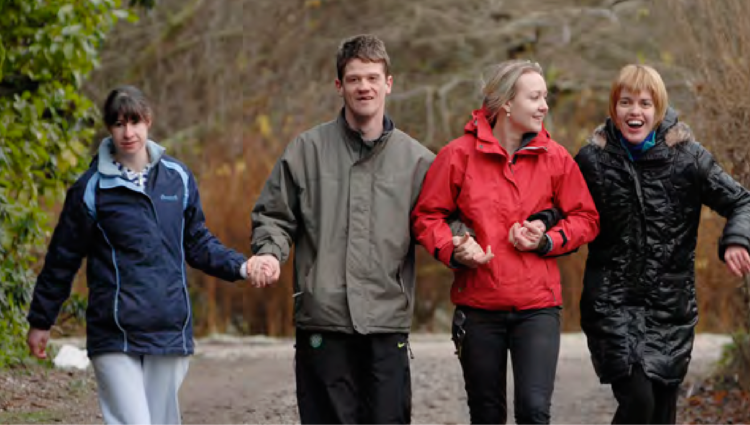