Each of us has a spiritual core of essential humanity and each of us has a unique destiny to fulfil. These convictions have lodged at the heart of the Camphill movement from the beginning. When Camphill was formed, in 1940, the world was strongly influenced by very different beliefs. The so-called science of eugenics sought to define people with learning disabilities as somehow lesser than the rest of us. Mainstream social policy in the United Kingdom focussed on segregation. Large institutions were created to permanently house disabled children and adults.

In complete contrast, Camphill practiced a radical inclusivity and equality of relationships. There was no division between ‘carer’ and ‘cared-for’. Everyone was expected to contribute to the work, social and cultural life of the community and everyone had their needs met from the resources held in common. The community was composed of a number of households which offered each individual the security and support of family life.

Mainstream schooling – ahead of it’s time

Camphill opened St. John’s School in Aberdeen to children with disabilities in 1951. At that time children with learning disabilities were widely considered unsuitable for education. Within a few years, the school decided to arrange its classes based on students’ chronological age rather than academic ability or ‘mental age’ as determined by IQ tests. This flew in the face of traditional conceptions of disability at that time. This kind of approach would later become known as ‘mainstreaming’ but Camphill was practising it almost twenty years before the 1970 Education Act made it compulsory that all children, regardless of disability, receive an education. (Brennan-Krohn, Z., 2009)

These days Camphill communities are modern care providers that receive the highest grades from the national care regulators. They often include a mix of employees as well as volunteers. Yet all continue to express the founding values of Camphill. We do this through building communities that preserve and promote the dignity and potential of each member.

There was a culture of inclusion and feeling of community … It was very apparent that everyone was valued for who they are and everyone is treated as equals, in a respectful and caring way. 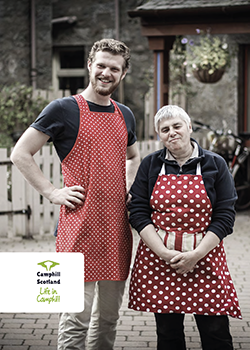