People get the most out of life at Tigh a’Chomainn

On the two aspects of Tigh a’Chomainn’s care services which were inspected, both were scored as being   Very Good (Grade 5). Quality Assessment grades awarded by the Care Inspectorate are important, both as independent assessments of quality and as the public currency by which commissioning and other decisions are made.  The Care Inspectorate currently use a six point grading scale, which grades areas inspected from Excellent (Grade 6) to Unsatisfactory (Grade 1).

During the inspection we spent some time with people who used the service. They were clearly happy with the support they received, and told us that they enjoyed living in Tigh-A’Chomainn.  They made comments such as:

‘I enjoy living here, it’s my home.’
‘We have a lovely meal together at night.’
‘I like the staff here (named staff)’
‘This is where I am happy.’

The report by the Care Inspectorate went on to say:

Records showed that where they could, people had been able to make decisions relating to the quality of their life such as what they did during the day or social activities they attended. Where people had limited or difficult verbal communications skills staff had worked hard to determine what people felt and activities they enjoyed, assessing reactions and seeking opinions from family members.

We could see that support plans clearly showed a reflection of the identified needs and wishes of individual residents. People who used the service were encouraged to complete a self review which looked at what was working well for them at that time, what was making them happy, or unhappy. 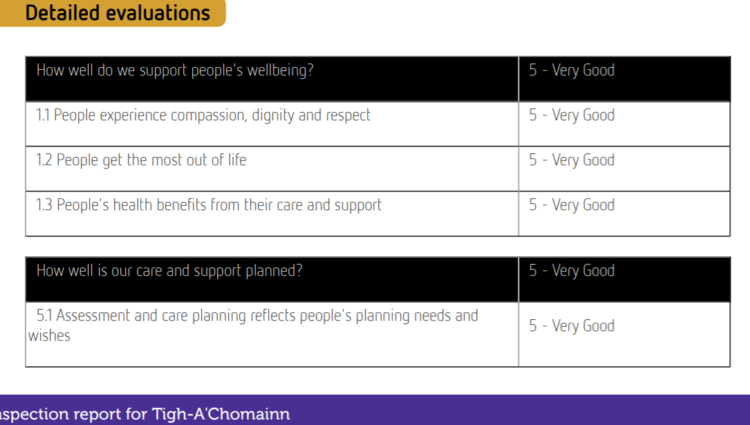