St John’s School held a Festival recently to celebrate their 70th Anniversary at Camphill School Aberdeen.  The Festival of Learning included exhibitions of the children’s and young people’s work, and also featured the opening of the Noah’s Ark replica model by local MSP, Maureen Watt. This model has been built in the playground by the pupils over the last couple of years.

The event, which was attended by children and young people from Camphill School Aberdeen, their families, staff, volunteers, supporters and former pupils, celebrated the ground breaking work of the St John’s School, and its significant contribution to the care, support and education of young people with complex needs.

I am so proud and grateful that you invited me to take part in the celebration of the 70th anniversary of St. John’s School. It was impressive and inspiring. 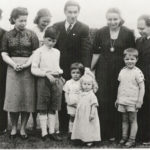 The founders believed that it was the right of every child to receive an education, and the first school lessons took place on 13 October 1947. During this time many children with complex needs were considered to be ineducable. Camphill became one of the first schools in the UK to offer such children education in an inclusive manner, as they were taught in classes along with the co-workers’ children and other local children. Since 1947 this educational impulse has spread throughout the Camphill Movement, with schools established in England, Ireland, Germany, Switzerland, Finland, America and South Africa, as well as being the inspiration for other similar schools. Indeed, inclusive integrated education has become a modern phenomenon embraced in schools in Scotland and in many other countries throughout the World.

It was wonderful to welcome so many former pupils to the celebration; they came from all over Scotland with their friends which helped make the occasion a real Scottish event. … Many thanks too for all the decorated wooden petals that came to us from around the world which will help us to complete the montage which now adorns a wall inside Carnelian Hall.